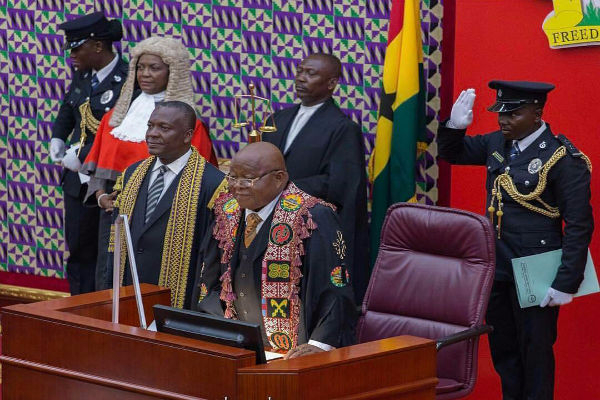 Ghanaian Speaker of Parliament, Prof Aaron Mike Oquaye, has admonished Members of Parliament to attach seriousness to all the meetings as the House resumes sessions ahead of the elections.

According to Prof Oquaye, despite the busy schedule of legislators as the campaign season hits top gear, it is imperative that they do not lose sight of the onerous duty of the Legislature.

With just three months to the December 7th elections, MPs have had to shuffle between their constituencies and Parliament. This has led to occasions where Parliament’s pressing issues are relegated to the background as the legislators fight for another opportunity in the next Parliament.

In his opening remarks, the Speaker called on the MPs not to renege on their duties even as elections approaches. “Hon Members, regardless of the election atmosphere we find ourselves in, I urge you to approach this crucial meeting with all seriousness and with all promptness. We cannot afford to abandon the work of the House,” he told a half-full Chamber.

Touching on the Private Member’s Bill, Prof Oquaye urged the MPs to remember their call to duty to Ghanaians and the next generation by making inputs into legislations being championed by some of their colleagues.

“As Members of this Parliament, it is important that we leave a legacy for the next generation. All Members are encouraged to submit various thematic areas you have identified in your constituents to be used in drafting some Private Member’s Bills.”

The Speaker also charged MPs to present well-researched statements which will be published in a new book on the country’s Legislature.

In accordance with the COVID-19 safety protocols and the need to curb a further spread of the virus, the Speaker announced that the House is considering establishing a virtual Parliament. He added that plans for that concept are far advanced, with First Deputy Speaker, Joe Osei Owusu and Minority Leader, Haruna Iddrisu tasked with the responsibility of realigning the Standing Orders of Parliament towards the implementation of the virtual Parliament.

The Minority Leader, Haruna Iddrisu condemned the secessionists activities in the Volta Region and urged the President to deal decisively with the separatist movement to protect the country’s sovereignty.

“There’s an ugly threat to the stability, sovereignty and territory of Ghana in the Volta Region. The President, as Commander-in-Chief of the Ghana Armed Forces, should, be assured that he has the full support of the House to deal decisively and ruthlessly with the threat to the sovereignty of our country,” he pledged. “We will support the President fully, as Commander-in-chief and the President of Ghana, to contain the imminent threat to the peace and stability of Ghana and particularly, the people of the Volta Region. The threat there can be worrying and can undermine the conduct of free and fair elections throughout Ghana and, particularly, in that region.” He added.

The Majority Leader, Osei Kyei-Mensah-Bonsu, in his remarks also rallied MPs to be united against any ulterior motive of those who want to destabilize the country.