Elephant frees itself from 14 lionesses in viral video 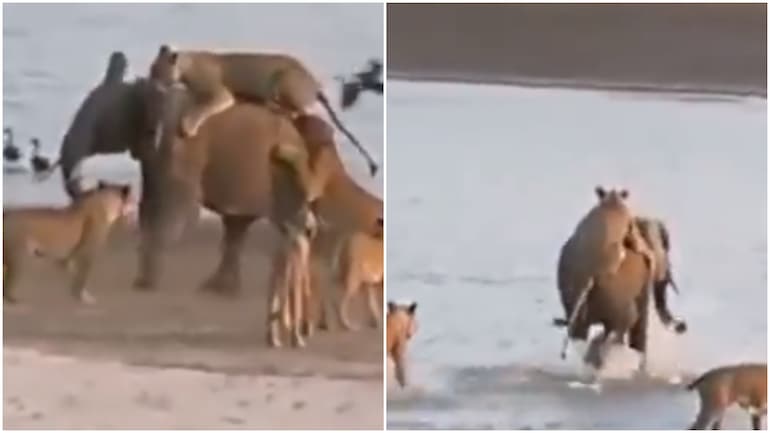 Every child learns the notion that the lion is the king of the jungle from their school text books. The majestic animal with a gorgeous mane is known as the ‘king’ and the internet has several videos to prove their king-like behaviour. However, we have a video that is going to give you a new definition of what a king looks like and it features a grand tusker.

Shared on Twitter by IFS officer Susanta Nanda, the video shows an elephant getting attacked by a pride of lionesses. As the clip goes on, the lionesses can be seen taking turns to jump on the elephant’s back to take it down. However, the brave jumbo refuses to give in and continues to lead the animals inside the water body.

After a considerable amount of struggle, the elephant manages to free itself from the deadly clutches of the lionesses and wades far away into the water body safely from the pride.

“Lone tusker takes on 14 lionesses & wins. Who should be than king of forest?” read the caption.

Lone tusker takes on 14 lionesses & wins…
Who should be than king of forest ?
Via Clement Ben pic.twitter.com/kYbZNvabFv

The clip has garnered over 255k views and tons of reactions. Netizens were amazed to see the tusker’s bravery. Many couldn’t stop gasping at how the elephant managed to fight with so many big cats all alone.