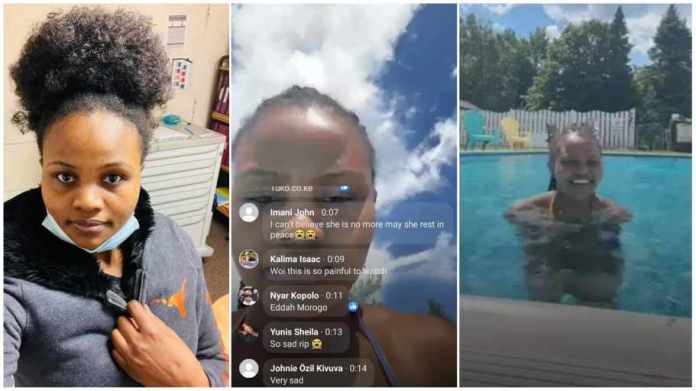 Hellen Wendy Nyabuto, 24, was filmed kicking and screaming moments before drowning in a pool at Key Motel in Ontario, Canada, Thursday evening.

The Kenyan nurse who was living in Canada drowned in a swimming pool while live-streaming on Facebook.

The 24-year-old was staying as a guest at the Key Motel in Chatsworth, Ontario when the incident occurred.

In the video, Hellen Wendy Nyabuto could be seen smiling as she entered from the shallow end of the pool.

Moments later, she made her way to deeper end where loud cries were heard and she began kicking violently in the water during the initial 10-minute long livestream to family and friends.

One of the men could be heard on the livestream refusing to enter the pool because a mystery object in the water “looked like an actual dead person”.

Hellen Wendy was found dead at the bottom of the pool by two men three hours later, as reported by The Daily Mail.

Nyabuto’s father Kiyondi Nyabuto revealed that he found out about the unfortunate incident after one of her friends texted him about it.

According to Canadian paper The Toronto Star, Hellen worked at as a frontline nurse during the pandemic at a nursing home before her death.

Meanwhile, A GoFundMe has since been raising money for her burial arrangements asking for close to $40K.