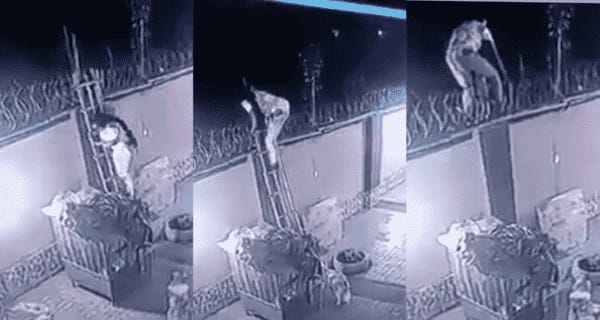 A man has announced his intentions to end the marriage between him and his wife over infidelity — The story has it that the man caught his wife scaling wall to go see her boyfriend just a few days after their wedding.

The heartbroken man shared a CCTV footage that gives an account of his wife scaling the wall to go see her boyfriend.

The man shared the footage on social media as he lamented bitterly about his wife’s infidelity and how she was ready to brace all challenges in order to leave the house.

Per the substance of the video, the woman helps herself climb onto the wall with a ladder. She proceeds to lift the ladder to the other side of the wall.

Speaking in traditional IGBO dialect, the distraught man complained about his wife’s sneaky attitude which resulted in her bold decision to scale the wall to go see her suitors in town.