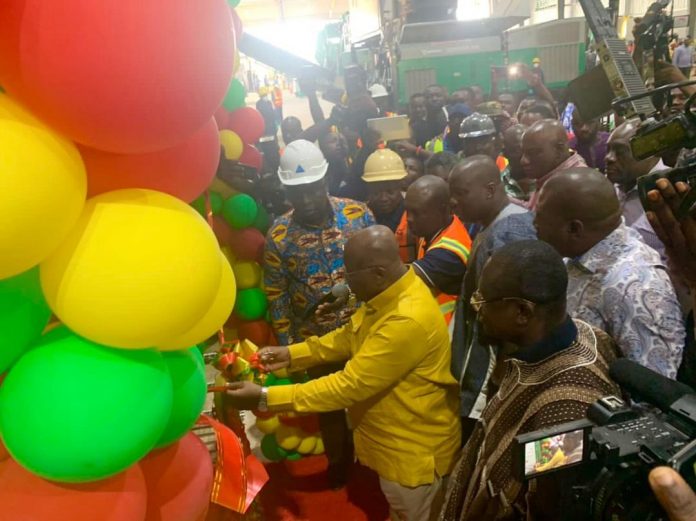 The plant, set up by the Jospong Group of Companies, will receive, sort, process and recycle the municipal solid waste, as well as treat medical waste to ensure safe disposal.

Other recoverable materials of the recycling process, which include plastics and metal scraps will serve as input materials for the steel and plastic manufacturing sectors.

Commissioning the plant, President Akufo-Addo reiterated his government’s commitment to partner with the private sector to develop the country.

He assured members of the business community that his government was prepared to assist anyone with a programme to help develop the country.

“Any serious businessman that has a programme for development and is seeking the assistance of the government, the Nana Addo government will give that businessman the support for us to develop our country,” the President stressed.

President Akufo-Addo lauded the Yagbonwura and his chiefs for sustaining the peace in the region, indicating that he had seen the “Savannah Region is ready for development.”

According to him, 21,428 tons of waste are generated daily, besides plastic wastes.

He explained that the figure would come to about 3,000 tons, if plastic waste is added.

Dr. SiawAgyepong said the Damongo compost and recycling plant was poised to play a major role in the waste management efforts in the country, especially within the Savannah Region.

He stated that the newly commissioned waste plant would serve as a waste treatment hub within the enclave, attending to wastes from Bole, Damongo, Sawla Tuna Kalba, Buipe , and Daboya.

He revealed that the plant could process about 400 tons of solid waste daily, besides 200 tons of compost daily, which will translate into 4,000 bags of 50kg compost daily production.

He said the plant would create 200 direct jobs and 300 indirect jobs for the people of the Savannah Region.

“This, to me, is a significant contribution in the employment situation in the Savannah Region. The plant will also serve as a research and the technical center for industries and academia,” Dr. Agyepong noted.

He expressed gratitude to the chiefs and people of the region for their support in ensuring the successful completion of the project.

The overlord of Gonja, YagbonwuraTuntumba Bore Essa, also thanked the Jospong Group for choosing the area as one of its business hubs.

He said the plant would offer job opportunities to his people and the entire youth in the Savannah Region.