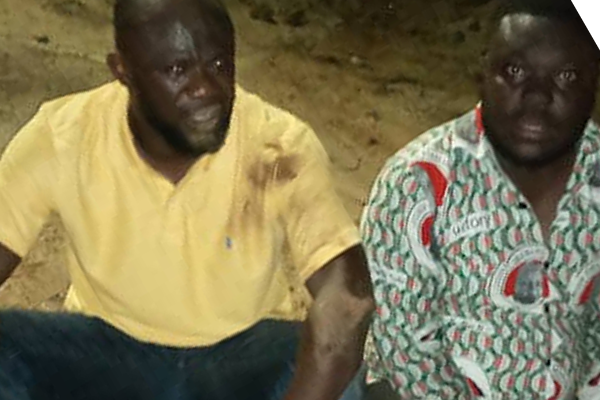 A National Democratic Congress (NDC) campaign team has been attacked by armed robbers at Ejuratia in the Afigya Kwabre District in Ashanti Region.

Two members out of the team of five, including the Regional Deputy Secretary, Sawadogo Mahmud, was severely beaten by the robbers.

The victims were part of NDC’s Alex Mould’s campaign team touring the Ashanti Region when the incident occurred, on Wednesday.

Narrating the incident to JoyNews’ Nana Yaw Gyimah, Mr Sawadogo Mahmud stated that while returning from Ejuratia to Heman, they had stopped to help a car stuck in a ditch on the side of the road.

Read Also: Thieves break into Osofo Kyiriabosom’s house, make away with his valuables

“We saw someone running towards us, he got a bit closer and we realised he had a gun. I started reversing…my right side was the only place I could turn but there was another ditch and I got stuck.”

The robbers, Mr Mahmud said, then debated on whether or not to kill them.

After deciding to let them live, the robbers walked them to the next town, all the while with one robber still threatening to kill them.

They made it to the next town to discover that a ‘trotro’ bus driver had been shot by the robbers and the passengers of the car made to lie down on the ground with guns pointed at them.

According to Mahmud’s narration, the robbers left them with the initial group that had been attacked and shortly after, the Assemblyman for the district came with some policemen.

All five of the persons who were attacked have been treated and discharged by the Mampongten Polyclinic.

Meanwhile, Mr Alex Mould told JoyNews that the activities of robbers were successful because of the absence of street lights in the area.

According to him, an ongoing road construction exercise in the area destroyed the underground power cables, plunging the streets into darkness at night.

“My understanding is that the contractor decided to do the gutters first, so he started from Heman junction and he has excavated the gutter all the way for about 4-5 km to Ejuratia. In doing that he disturbed the electrical wires that supply the street lighting; he destroyed them. So there’s no street lighting in the area.”

“The ordeal my guys are going through, I can’t even imagine. Our lady organizer, she can’t even sleep, so this has to be taken seriously at a very high level in this country.

He hopes that government will adequately resource the police so they can better fight against the menace of armed robbers in the country.