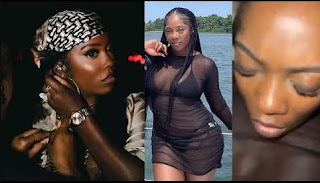 Nigerian singer, Tiwa Savage has sparked reactions over a revealing outfit she rocked at an event.

Tiwa Savage has come under heavy criticism by fans and netizens after she used an enlightening gown at a party which showed part of her backside.

Recall that Tiwa had clarified in a viral video the reason behind her hit song ‘Somebody’s son’, and according to her, the song was not about relationships but about Jesus Christ.

“They said this song would not be a hit because only females will listen to it. Men are not going to sing Somebody’s son.

“But you know when I wrote this song, I was not thinking about a relationship but Jesus Christ because he’s the real somebody’s son.

“So I said to doubters that people will relate to this song whether you’re a man or woman because we all need somebody’s son.” Tiwa said.

Barely a few days after a video of Tiwa Savage saying that her hit song Somebody’s Son was about Jesus Christ, the singer has sparked reactions with her outfit at an event.

The video showed the Nigerian music star rocking a revealing black outfit as she showed a side view of her behind.

However, fans have questioned her for exposing her body in the public after claiming her song was about Jesus Christ.