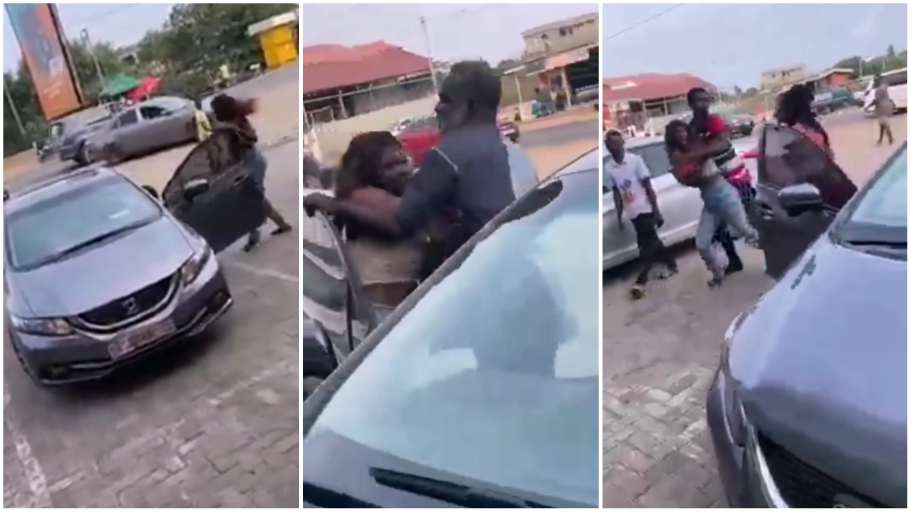 Social media has been buzzing after two sidechicks were captured fighting in the presence of a crowd over a man said to be their ‘sʋgαr dαddy’.

The said incident is reported to have occurred at East Legon close to a popular snack shop.

“Officially sugar daddies are of high demand in Accra here chai..this happened at East Legon. Two side chicks fight over sʋgαr dαddy,” the caption of a video which captured the incident shared by blogger Entamoty read.

In the video that has since gone viral, a lady dressed in a crop top and a pair of jeans (side chick one) approached a couple seated in front of the known snack shop.

Before detecting her next move, the two women were captured exchanging blows and fighting over the older man who was captured earlier seated with the other lady (alleged side chick 2) before the lady in crop top and jeans approached them.

The two women were separated by bystanders. The ‘sʋgαr dαddy’ after noticing the attention that was being drawn to them by side chick one, beckoned his date to enter the car so they could leave but was stopped by side chick one who had approached them earlier.

Side chick one forced her way while trying to enter the ‘sʋgαr daddy’s’ car when side chick two got out of the car warning her to leave the door with some force of aggression.

This gave the ‘sugαr daddy’ some time to drive off with his date while observers watched.