What Kind Of Game Is This? See The Game These People Were Playing That Got People Talking 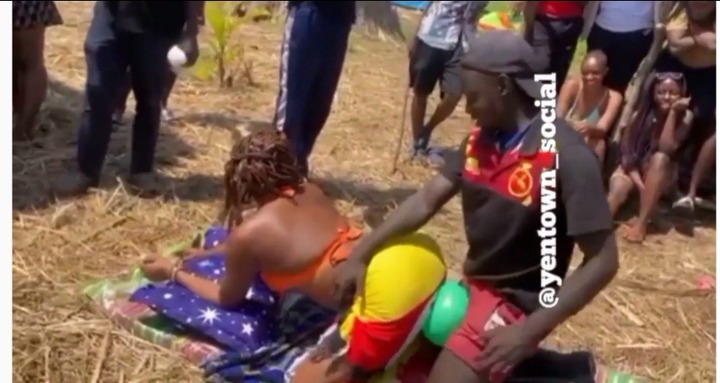 Some people have been recorded on camera playing some strange game at a place, and many social media users after coming across this game couple keep quiet over it. If you watch the video carefully, you can see that these people have gathered at a place and they are having a pillow and a mat at their center. Another guy was seen holding a whistle which is used to start the game.

The rules of the game are that a lady will go and squat and a guy will go and grind her with a balloon at the lady’s backside. guy is not able to grind the lady to burst the balloon he will be given another one but the person who uses fewer balloons will be the winner. The lady went and squat romantically on the mat. The guy was given the balloon and he positioned it well in the lady’s buttock.

He winds his waist only once and the balloon bursts. The people at the place were seen shouting and cheering the guy up. Some social media users after coming across this video said that this is an interesting game. They will love to play this kind of game with their partners.